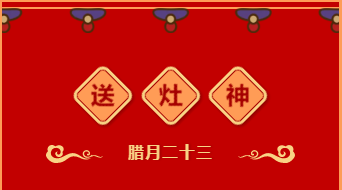 Xiao nian is not a specific festival, because of local customs, known as the festival is not the same. The main folk activities during the New Year include pasting Spring Festival couplets, sweeping dust and offering sacrifices to the kitchen.

Off-year everywhere have different concepts and the date, the north is the twelfth month, the south is the twelfth month 24, the jiangsu region "month, 24" and "the night before New Year's eve" are called off-year, nanjing area called the fifteenth day of the Lantern Festival as an off year, parts of yunnan is the 16th day, southwestern and northern part of the ethnic minority areas is New Year's eve.

The New Year also means that people begin to prepare for the New Year goods, ready to clean a good year, said the New Year to have a new atmosphere, expressed the Chinese working people a kind of good wishes to bid farewell to the old year and usher in the New Year, yingxiang blessing.

This day, is also the day of folk kitchen. According to folklore, on the 23rd day of the twelfth month of the lunar calendar, the kitchen god will report the good and evil of the family to the jade emperor, who will reward and punish the kitchen god. Therefore, when serving the oven, people put candy, water, beans and clover on the table in front of the king of the oven. Among them, after 3 kinds are the mount that ascends for kitchen king prepares material. When offering sacrifices to the kitchen, they would melt the sugar with fire and put it on the mouth of the kitchen god. In this way, he could not speak ill of the jade emperor.

After 23, from the Spring Festival only six, seven days, the preparation for the Spring Festival seems more enthusiastic. To thoroughly clean the room, commonly known as sweeping dust, dust in order to get rid of the old and welcome the new, pulling out the ominous. Each household must carry on the cleaning thoroughly earnestly, achieves the window to be bright several clean. Paint the walls, scrub the glass, paste the Windows, paste New Year pictures and so on.